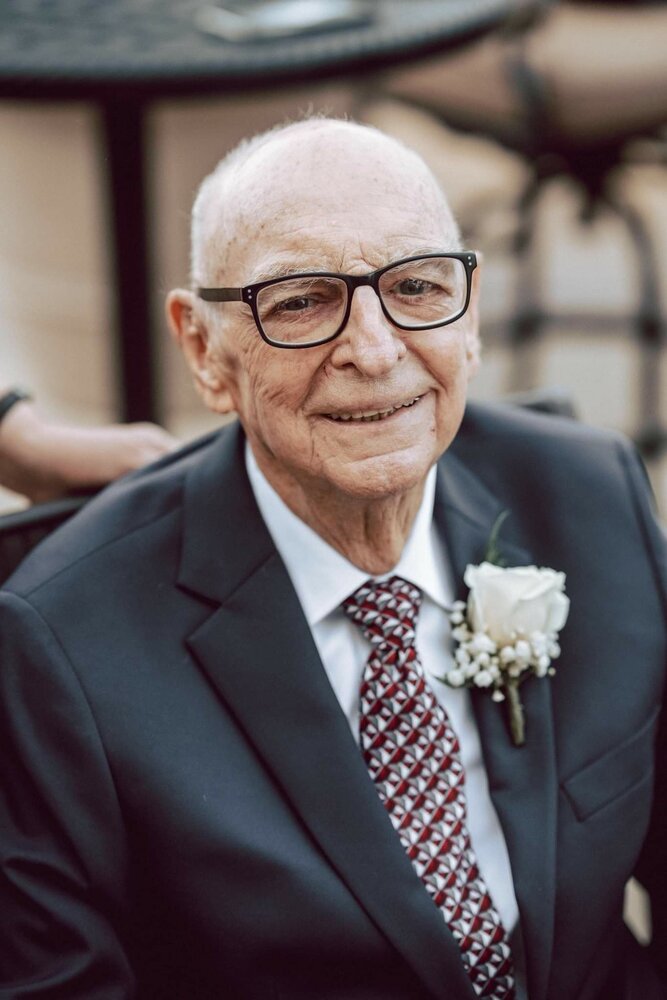 Please share a memory of George to include in a keepsake book for family and friends.
View Tribute Book
It is with great sadness that the family of George M. Lyons, Sr shares the news of his passing on November 2, 2022 at the age of 89. He left this world peacefully surrounded by his family George was born on April 4, 1933, to Joseph D. Lyons and Francis A. Lyons of Freeport, NY. The importance of family and friends was instilled in him as a young man of 15 after his father passed away unexpectedly. George was raised by his mother, aunts, uncles, older cousins and neighbors guiding him through that difficult time and keeping him on a positive path. After graduating from Freeport High School, George enrolled at Farmingdale State College, receiving his Associates Degree in Mechanical Engineering. After college, he served his country proudly enlisting in the United States Navy serving from June 1953 to April 1957. He completed his active service as a Petty Officer, 2nd Class, Machinist Mate. In 1959, George married Irene Malnati (Lyons), who was his life-long love of 58 years and preceded him in death in 2017. George had a strong work ethic that he passed on to all his children and grandchildren. He worked for more than 30 years at NY Telephone CO/Bell Atlantic/NYNEX before retiring in 1991 as a Facilities Manager. George was very proud of his work at Maria Regina Roman Catholic Church in Seaford as the founder and manager of the Maria Regina Innkeepers, who prepare over 900 meals and 4,000 sandwiches each month that are delivered to the Mary Brennan INN Soup Kitchen. He was also a Maria Regina Trustee, served on the Pastoral Council and as an Evangelization. But what was closest to George’s heart was his family. He was so proud of his five children and nine grandchildren. If you spoke to him for more than a minute, you were bound to hear a story about one or all of them. George is survived by his children Nancy (Scott) Crawford, George (Barbara), Susan, Joseph (Sarah) and Michael (Elizabeth). Devoted grandfather of Julie Clark (Alex), Kelly Giordano (Stephen), Sean, Jamie Clark, Bryan, Corey, A.J., Sadie and Talia and beloved uncle to many nieces and a nephews. George was predeceased by his sister Joan (McNeely). Visitation will be William E. Law Funeral Home, 1 Jerusalem Ave, Massapequa, NY, 11758 on Tuesday, November 8, 2022 from 1-4 pm and 6-9 pm. In lieu of flowers, visitors will be able to donate to the Maria Regina Innkeepers on site. A church service will be held on Wednesday, November 9, 2022, 9:45 am at Maria Regina RC Church, Seaford, NY 11783 Interment will be at St. Charles Cemetery, 2015 Wellwood Ave, Farmingdale, NY
Tuesday
8
November

In lieu of flowers:

Share Your Memory of
George
Upload Your Memory View All Memories
Be the first to upload a memory!
Share A Memory
Plant a Tree