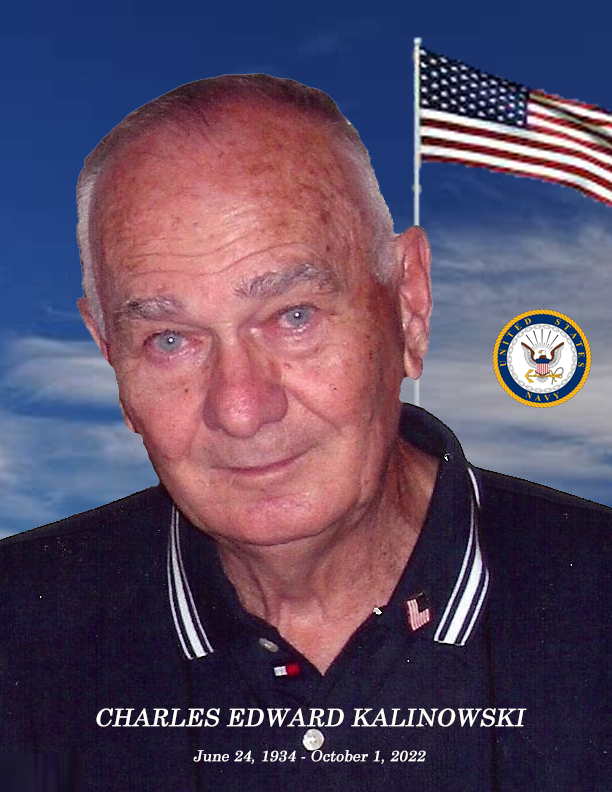 Please share a memory of Charles to include in a keepsake book for family and friends.
View Tribute Book
Charles (Chuck) Edward Kalinowski passed away peacefully on October 1st, 2022 at the age of 88. He was born on June 24th, 1934 and was the second youngest and the last surviving of Anthony and Tillie. Chuck married his college sweetheart Carole, on September 3rd, 1956. They were married 66 years. He is survived by his wife Carole and his children, Kathleen (Mike) Zoda, Charles, Jr., James (Maureen), Donald (Honi) and Keith (Paige). His son Kevin passed away in 2004. He has 21 Grandchildren and 11 Great grandchildren. Chuck was a fixture at Maria Regina Catholic Church in Seaford from its early years, serving as a volunteer at every event. He was constantly thinking of how to grow the church community through social gatherings such as the first carnivals at the church. He created a program for children to play intramural basketball when they were not able to make the cut on the CYO teams. Carole would be by his side running the kitchen. He was at the church as much as he was at his job. Chuck was a member and past president of The Holy Name Society and was also a 4th Degree member and Past Grand Knight of the Knights of Columbus, Delaney Council. In his retirement he volunteered with Carole to start and run a hot kitchen for Maria Regina School, which still runs today. He was a pillar of the community. Known to many as Mr. K or Coach K, he taught and coached at Wantagh High School for 33 years. He was Chairman of the Business Department and summer school principal. He also ran the summer teen center were children could come to play basketball and a host of other activities that kept the kids engaged and off the streets. When Chuck retired from teaching and coaching the boys’ varsity basketball team, he was asked if he would come back and coach the girls’ team to which he gladly agreed. Chuck's coaching career also covered football and track. Chuck was a significant figure in Long Island High School basketball where he brought High School games to the Nassau Coliseum to play at halftime of the ABA NY Nets games. He also organized and was head coach of an elite group of Long Island’s Top 100 basketball players to field a team that played against the Russian National team. If you had to sum up what Chuck did for a living, you can say that he made men. Chuck posted frequently on his Facebook page. Reading his posts revealed a man who was devoted to his family - both living and deceased. He was a patriotic veteran of the US Navy and loved the United States of America. There was never an important moment in the country's history that would go by unrecognized. He remembered those who have passed with the same devotion and admiration for them as he did when they were with him. He shared many pictures of family members gathered together and looking joyful in doing so. Just looking at those pictures told a story of a family man who couldn't think of a better place to be than gathered together! In retirement he enjoyed nothing more than spending time with his family, especially cruising the high seas. He worked with Carole at Disney until just a few years ago. Both he and Carole would get very excited and animated, whenever they told of their adventures! Summed up perfectly by a dear friend: "Chuck Kalinowski was just one of the NICEST people you will ever meet. He was kind and compassionate. He really was a Gentle Man." In lieu of flowers, Chuck would want donations sent to “Tunnels to Towers Foundation” or any worthy charity.
Thursday
6
October

Share Your Memory of
Charles
Upload Your Memory View All Memories
Be the first to upload a memory!
Share A Memory
Plant a Tree