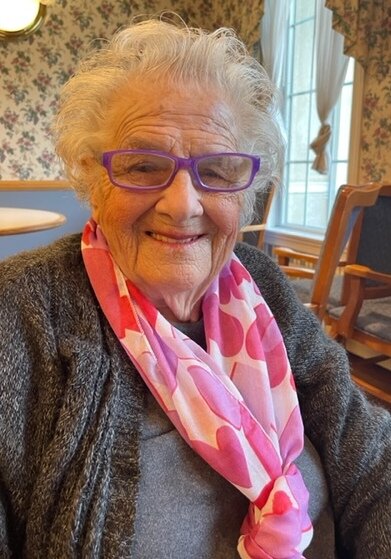 Please share a memory of Josephine to include in a keepsake book for family and friends.
View Tribute Book
Josephine Rossi Of Massapequa, NY passed away peacefully on January 30, 2022 with her loving family by her side. She is survived by her four daughters,Charlotte DeRose,her husband, Alexander DeRose, Georgeanne Andreasi, Susanne Daddino, her husband, Anthony Daddino, Marianne Passero, her husband Anthony Passero, eight grandchildren and ten great grandchildren with another on her way. Josephine was born in NYC on June 22, 1924 to Benjamin and Letizia Delu. Josie, as she was affectionately called, married Maurizio G. Rossi on April 21, 1951 in Queens, NY and worked for the NYC Dept. Of Social Services. After her marriage, she and her husband moved to Massapequa in October of 1955. She raised her four daughters and was extremely proud of the women that they had become. She also was proud of all of her grandchildren and great grandchildren. She worked as a waitress at Francesco’s Italian Restaurant in Bethpage for over 20 years. Josie’s love of life was infectious. Everyone who met her fell in love and never forgot her. She loved her daughters and their families. She enjoyed her trips to Atlantic City, watching Fox News and listening to Italian music. She proudly attended the inauguration of George W. Bush and was a proud Republican supporter of President Donald Trump. On a cruise to Italy in 1948 with her mother, she met her friend for life, Elvira Gardini. They never exchanged numbers on the ship, but as fate would have it, six weeks later they found themselves on the same ship for their return to the states.They remained friends for over 70 years with Josie having four daughters and Elvira having four sons. She also leaves her friend of over 30 years, Kim Riley, who she thought of as another daughter. She vacationed in Boca Raton for over ten years enjoying going to the beach, playing cards or just sitting in the sun at the pool. She will be sorely missed by all who knew her at Boca Teeca. Josie is predeceased by her husband, Maurizio, her parents, Letizia and Benjamin Delu, and her brother and his wife, Aldo and Marie Delu. In lieu of flowers, donations to either St. Jude or St. Anthony would be appreciated. We will never forget our mom and the things that she has taught us and hope that her love of life stays with each of us. God bless our mother and may God hold her in his arms forever.
Thursday
3
February

Share Your Memory of
Josephine
Upload Your Memory View All Memories
Be the first to upload a memory!
Share A Memory
Plant a Tree