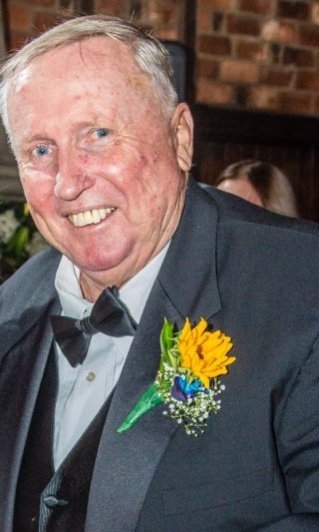 Please share a memory of William to include in a keepsake book for family and friends.
View Tribute Book
William T. Hayden Bill Hayden was born in Brooklyn, NY on November 22nd, 1936. He left this world peacefully on February 28th, 2021 surrounded by his family. Bill was happily married for over 56 years to his loving and devoted wife Virginia. They settled in Massapequa, NY, in 1964 where they raised their four children: Mary Coons (Kevin), Colleen Bossert (George), Brian (Lorraine Fedyszyn), and Greg (Michelle). He set the example of service to his family by being an active parishioner at Maria Regina in Seaford. To name a few of his activities, Bill served as a catechist, basketball, and football coach, CYO track coordinator, Eucharist minister, lector, parish council president, bazaar volunteer, parish dance coordinator, and ran multiple fundraisers. After serving in the United States Marine Corps, Bill had a successful career in corporate taxes. Whether he worked at IBM, Control Data, Grolier Publishers, or Citibank, he made a tremendous impact on his coworkers. His numerous business trips allowed him and his wife to travel the country. After 20 years at Citibank, he retired in 1997 which allowed him to continue his passion for travel. He was the grand organizer of many European river cruises with his friends. His travels included Alaska, numerous trips to Ireland, Italy, Israel, and most recently to Africa. Retirement also allowed him the freedom to spend more time with his true love: his family. He absolute adored his eight grandchildren: Matthew, Christopher, Patrick, Laura, Caitlin, Christine, Shelby, and Kyle. They always felt his love and support. He was often rooting for them in sporting events, attending plays, concerts, art exhibitions, graduations, family gatherings, and numerous vacations. They all knew who their biggest fan was. Bill also found time to contribute to various charity organizations. He ran the St. Vincent DePaul pantry at Maria Regina as well as served as a board member for the Wilson Foundation. He served as a historian for the Ancient of Hibernians Division 15. Bill was a man of diverse passions that he shared with his wife. He could be seen enthusiastically cheering on the Notre Dame football team and the NY Islanders as well as joyfully attending operas and Broadway shows. His legacy will be the gift of faith and eternal optimism that he gave to his family, friends, and anyone who had the privilege of knowing him. The question posed to him from one of his grandchildren was, ”What would you want me to know most of all?” His reply: “That I love you all the same. I pray for you all the time and always will even after I’m gone.”
Wednesday
3
March

Share Your Memory of
William
Upload Your Memory View All Memories
Be the first to upload a memory!
Share A Memory
Plant a Tree