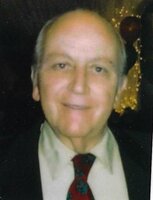 Gabriel Joseph DeCanio passed away on Friday, November 5th. Gabriel was born in New Jersey on January 1st 1935. The only child to John and Carmelia DeCanio. After serving in the Navy, he returned to Brooklyn to marry his childhood sweetheart Constance Davie on September 13th 1958. Together they had 6 children, 12 grandchildren and 2 great grandchildren. Gabe worked for Pfizer for most of his career but was most proud of his volunteer work. As Grand Knight of the Knights of Columbus he spent much time supporting charities such as the Special Olympics. An original Dodgers fan, he loved baseball and baseball hats. And eventually embraced the Brooklyn Cyclones as his home town team. “Uncle Gabe” was always the life of any party. A trait he passed down to all of us. But because there was no “Gabe” without “Connie” he left this party two weeks after her passing. May he rest in peace by her side.