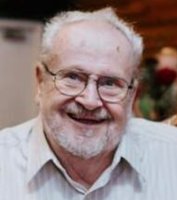 Thomas was born in Manhattan on December 20, 1936 to James and Louise Jones. He was their second child, joining his big brother Jimmy. He passed away peacefully on March 6, 2021 after a brief illness and is now reunited with his beloved Elizabeth. Elizabeth (Ryan) Jones predeceased Tom in 2011 after 57 years of marriage. Tom and Liz were married in 1954 and spent the first few years of their marriage living in NYC, where they started their family. After 15 years in Queens Village, Massapequa became their home in 1980. That family became quite large over the years. Tom was a father to 15 children: Jackie (Aggie), Louise Karman (Al), Jimmy, Patrick (Susan), Kevin (Pam), Brian, Mary Rodenas (Jeff), Adrienne, Darren, Christopher, Nicole, Addie, Kamron, and Tamiya. His son Thomas Jr. (Sharon) passed away in 2006. Tom is the proud grandfather of 22 and great-grandfather of 15. Tom was guided by his strong Catholic faith and has been an active parishioner in Maria Regina for over 40 years. Through the years, Tom has been a fervent supporter of those less fortunate. Tom and Liz were actively involved in the NYC foster care system, taking many children into their home and ultimately adopting quite a few. For many years Tom was also involved with the Boy Scouts of America, even using precious vacation time to spend a week volunteering at their Summer Camp. Tom prided himself on being a blue-collar worker and showed his children that with hard work anything is possible. He worked for many years as a truck driver for Schaefer beer in Brooklyn. For over 20 years he worked for the Massapequa School District, ultimately as the head of the Grounds Crew, a position he retired from. Tom loved hockey and turned all of his children into die-hard New York Ranger fans. That obsession has been both a blessing and a curse. He would call himself a fan but actually would spend most of his time complaining about them. He would fire the coach every year and the team would go through goalies like no other, if he had his way. But, there was that glorious day in June 1994. Tom loved to read, mostly James Patterson. He loved old movies, preferably in black and white. No one could tell a story like Tom. He could make the most mundane story fascinating, and lengthy. His sense of humor was quite sharp, as he made sarcasm an art form. His legacy is his big, beautiful, blended family. He will be remembered for helping so many when they were down on their luck. He did it quietly and without fanfare. He wasn’t someone who shared emotion but rather demonstrated it by his actions. He is now safely in the arms of his beloved wife and son. One of his lasting quotes, generally in a crisis, would be, “if this is the worst that is going to happen, we are going to be alright.” He spent his life helping others and opening his door to anyone who needed a place to stay. A Mass of Christian Burial will be held Wednesday 9:45 a.m. at Maria Regina Church, Seaford. Interment St. Charles Cemetery.