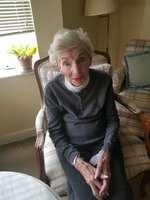 Funeral services for Lucille will be private. Condolences may be placed on this website under “Share a Memory”. Lucille Kurz, most recently a resident of The Bristal Assisted Living Facility in Massapequa, NY died on June 27, 2020, at the age of 93, from injuries related to a fall. Lucille is survived by her son, Steven and younger sister, Diane; her grandchildren, Brian, Eric, Alison, Keith, and Lauren; and her great-grandchildren, Sean, Colin, Eve, Lilia, Sebastian, Elizabeth, and Corinne. She is predeceased by her husband, John; son, John, Jr.; and brother, Robert. Lucille was born in Brooklyn, New York on January 18, 1927 to Sebastian “Sam” Bortolin and Teresa Prebianca. She graduated from Jamaica High School and on August 28, 1948, married John “Jack” Kurz. On August 19, 1949 and May 16, 1954, respectively, they welcomed their two sons John and Steven to the family. While Lucille worked occasionally at part-time work, she spent most of her years as a homemaker. Lucille was active and athletic. She enjoyed boating, playing tennis, playing cards, and spending time outside. She enjoyed the years that she and Jack lived at the Waterways in Moriches, NY, where they were extremely active and had many friends. Lucille particularly enjoyed visits by her grandchildren and spending time with them on her boat. In her last years, Lucille looked forward to visits by her great-grandchildren at the Assisted Living Facility. Lucille was a great mother and will be missed by her family and friends. In lieu of flowers, a donation to St. Jude Children’s Research Hospital would be greatly appreciated. St. Jude Children’s Research Hospital 501 St. Jude Place Memphis, TN 38105