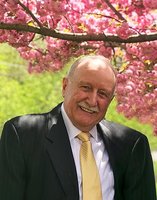 Robert Milani was born August 25, 1943 in Brooklyn, NY to John and Ida Milani. Robert is survived by his wife, Madeline, daughters Denise and Michele, son Robert, stepson John, and grandchildren Vittoria, Salvatore, Sophia, Grace, and many cousins,nieces, and nephews. Robert was a proud member of Teamsters Local 812, New York’s Soft Drink and Brewery Union. Robert worked for Pepsi Cola Bottling Company in Long Island City, Canarse, and College Point. Before working for Pepsi Cola Bottling, Robert worked at The Main Bar on Rockaway Blvd and was the owner of The Pheasant Inn on Liberty Ave in Ozone Park, NY. Robert was a caring man who was loved by his family and friends. He had a great sense of humor and was always willing to go out of his way to help anyone. His kindness will be missed and he will always be remembered by all who met him. Robert,whether as husband, dad, papa, brother-in-law, father-in-law, Uncle Bob, or friend, was cherished and loved.